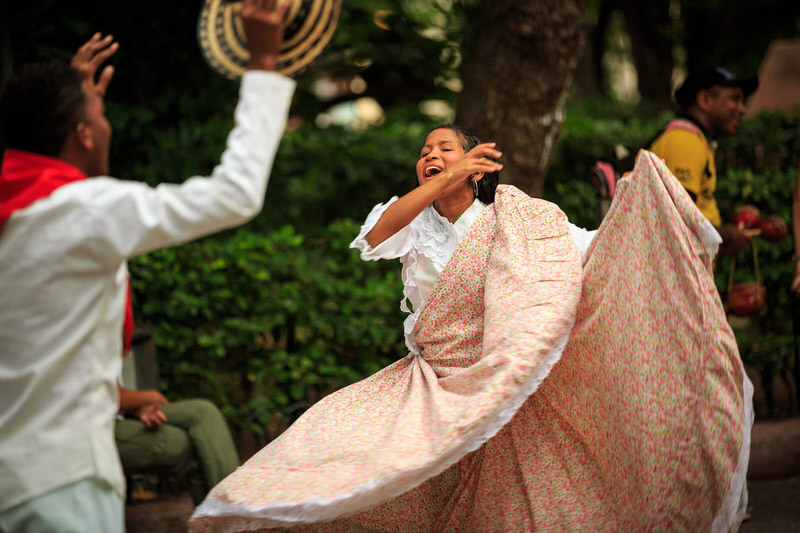 The huge variety of musical genres in Colombia is proof of the country’s multiculturalism.

Music in Colombia, like most of the country’s cultural manifestations, is influenced by the Spanish, Indian and African elements that formed the ethnography of this nation.

In Colombia there are many styles of music typical of the country according to the region and can be divided into four geographical areas: the music of the Caribbean Coast, the Pacific (Afro music), the Andean Region (indigenous music) and the Eastern Plains. Anyway, here we will only mention those that can be heard as usual in the night party places in Bogota. It is also important to point out that in Colombia the rumba is not a style of music, but a synonym of party or dance, that is to say when people say “we go out to rumbear” they mean to go out to party or dance.

The Porro is one of the most beautiful Latin rhythms dating from the 50s. Unfortunately it has been abandoned in favor of the Vallenato, and it is hardly heard in Colombia anymore, except in Medellin where there are still 2 radios that broadcast it regularly.

If you are traveling in the antioquia area, I strongly recommend you to buy some mp3 discs from Porro!

Cumbia is a folk music and dance genre that began in Colombia, on the Caribbean coast, and Panama and has become one of the most popular genres throughout Latin America when Colombian cumbia was commercialized and modernized. This style was formed from the union of indigenous music with Afro music.

Some of the most popular songs are: Yo me llamo Cumbia, Colombia tierra querida, La pollera colorá and Cumbia del Caribe.

Vallenato is one of the most popular and common music styles in Colombia and it is very easy to find night clubs in Bogotá. Vallenato is a descendant of Cumbia, that is why it has the same binary rhythmic structure. The instruments that compose the classic Vallenato are: the drum or the caja vallenata, the guachara (indigenous instrument) and the accordion. Some of the most famous composers are Rafael Escalona, Emiliano Zuleta, Alejo Durán, Enrique Díaz and Carlos Vives.

Book your tour to Colombia Now

Salsa is a rhythm that originated in Cuba and was introduced to Colombia from the city of Barranquilla, however, others say that the salsa was introduced by American sailors stopping in Buenavista on the Pacific coast and then in Cali.

Currently the city that is recognized as the capital of salsa in Colombia is Cali. Even so, it is easy to find places in Bogota to dance good salsa.

Joe Arroyo is considered one of the best salsa artists in Colombia.

The arrival of this music to the shores of the Caribbean is in itself a fascinating episode: although many mention a diffuse origin since the mid-twentieth century through maritime exchanges between Africa and the Caribbean ports, the truth is that still active entrepreneurs such as Humberto Castillo from Antioquia or the Caribbean Osman Torregroza and Hernan Ahumada traveled through various regions of the world in search of African records to market and disseminate in the region.

This African presence on the Caribbean coast also has an interesting additional chapter: Congolese musicians such as M’bilia Bel and the aforementioned Lokassa Ya M’bongo, surprised by the success of their music in a country as distant for them as Colombia, have had the opportunity to cross the Atlantic to perform on the north coast, in front of an audience that has been enjoying and dancing to their songs for decades.

The Dance of the Yonna is a beautiful indigenous dance that is danced in the Guajira region, practiced on various occasions, especially when a young woman passes from adolescence to adulthood.