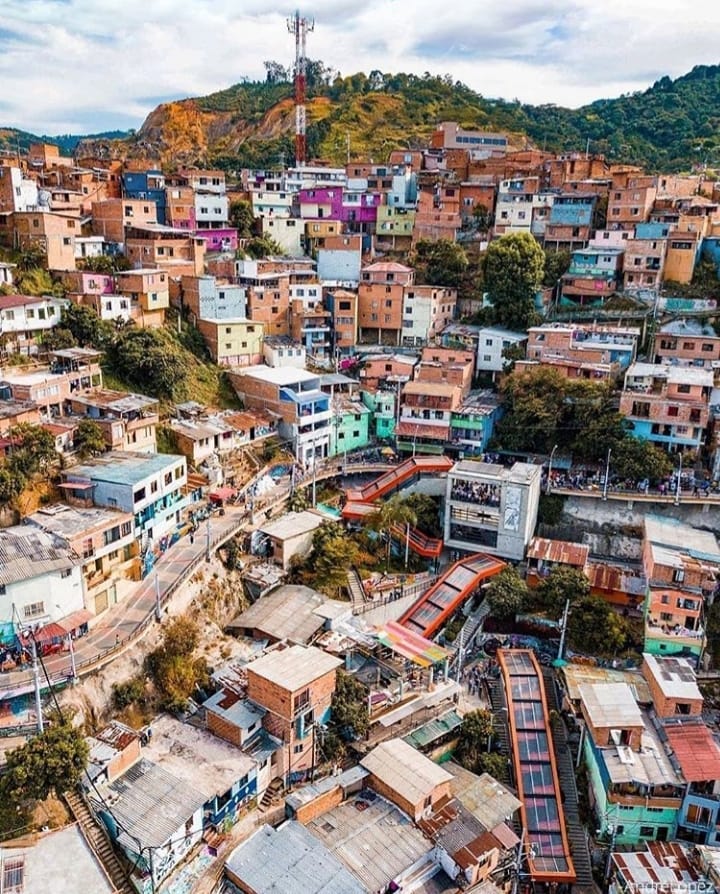 Commune 13 of Medellin, all you need to know before you go

Comuna 13 has become one of the most visited places in Medellin in recent times.

Its famous Comuna 13 Graffiti Tour is the best way to get to know this commune in depth, hand in hand with its inhabitants.

Why is Comuna 13 so famous?

Well, this may be a bit controversial, but the reality is that it has gone from being a place where you couldn’t enter due to the violence of the guerrillas, paramilitaries, gangs and narcos to a kind of open-air museum that tries to tell what Comuna 13 was before and how it has become what it is now.

Is it dangerous to go to Comuna 13?

We must not forget that in the 1990s Commune 13 was one of the most dangerous and violent places in the world.

Today this has changed radically, we were in October 2019, and once you enter Commune 13, you are in a completely safe place.

But don’t forget that there are places and situations that can change for different reasons in a short time.

That’s why it’s better to get an update on the state of Commune 13 before you go, in Medellin.

When you enter Comuna 13 for a visit, guides generally don’t give any recommendation regarding the safety

Book your tour to Comuna 13 Now

Comuna 13 Some Tips and Tricks

The city of Medellin is in a valley surrounded by mountains.

The communes that surround Medellín were built informally on the slopes of the mountains.

The origin of the communes comes from their inhabitants, the great majority of them displaced from rural areas in conflict with the guerrillas or paramilitaries.

When they settled in these areas, they built informally, and lacked all kinds of services.

The authorities turned their backs completely on the communes, and they had to organize themselves.

Another particularity of commune 13 was the CAP (Comandos Armados del Pueblo) which did not depend on either the FARC (Fuerzas Armadas Revolucionarias de Colombia) or the ELN (Ejército de Liberación Nacional) but shared with both the need to confront the State.

The CAPs were very successful as they were formed by people from the commune and put political action before military action.

The guerrillas of the ELN, FARC and the CAP (Comandos Armados del Pueblo) initially intended to help the commune against the bourgeoisie that was inheriting them, but it didn’t take long before it became a nightmare.

The first child soldiers who were recruited by these guerrillas and the violence that was being exercised was the turning point.

Then the paramilitaries came to drive out the guerrillas, but that was more violence and killings, as in a war.

And the Medellin cartel did not help solve that war of “shootings” and deaths at any time of day every day.

Pablo Escobar’s cartel fed on young people with no future to turn them into hitmen, kidnappers or extortionists.

Escobar died in 1993 and the idea that the city would move to a transition of peace is a utopia.

New criminal groups emerged and Comuna 13 remained under their control, with many innocent casualties month after month.

It is important to tell you all this so that you understand the context of commune 13.

Another of the moments that have marked Comuna 13 the most was Operation Orion.

At the beginning of the 2000’s, the government of Alvaro Uribe decided to “get their hands on” Medellín and the CAPs (and basically anything that was resistance, especially violent resistance) did not enter into the plans they had for the city.

So in 2002 they began a series of military operations (operations with war tanks, helicopters shooting at rooftops, 3000 uniformed people…) and the confrontations between the armed groups and the police began.

During the operation that lasted several days, the balance of victims was very high, 80 civilians injured, 17 homicides committed by the Public Force, 71 people killed by the paramilitaries, 12 people tortured, 92 forced disappearances and 370 arbitrary detentions and a stray bullet kills a six-year-old boy, Sergio Cespedes.

In the place where the little boy was killed today there is a playground named after him (‘Parque Infantil Sergio Céspedes’) and some slides in his honor.

The controversy still continues, since La Escombrera, a place where construction materials and garbage are piled up, which is located in front of Commune 13, is where it is said that those who disappeared during Operation Orion were buried.

Excavations have been made to find the bodies of the missing, but they have not been found.

The expulsion of the guerrillas did not bring Commune 13 back to peace, as it was the gateway for the paramilitaries, specifically the Cacique Nutibara group.

Assassinations, torture and forced disappearances were once again the order of the day.

Why has Comuna 13 changed?

Well, one of the main reasons is that the authorities have started to invest in improving the services of the commune.

And to top it off, they invested in free escalators for the inhabitants of the commune.

This made getting up and down easier.

During the works there had to be a truce, a cease-fire, something.

Not only public works did their work, but also the many social inclusion programs, which opened a new path of opportunities for the youngest.

Something that woke up the youngest and they decided to start painting with graffiti their sad walls stained with blood and marked by bullets, giving them a color that today attracts thousands of tourists from all over the world every day.

Even the football pitch, which in hard times was used as a place for public executions, has become a place to play again.

Not all that glitters is gold

But not all that glitters is gold.

The guides have to pay a small amount of money to the bands for every tourist that enters (3000 COPs – 1 dollar).

The owners of the different establishments opened because of the massive arrival of tourists also have to pay another small amount.

It is as if the gangs have seen tourism as an easy way to make money without having to kill.

If I’m honest, it was the only place in Medellín where I took out the reflex camera without any fear.

On the positive side, Commune 13 is a hotbed of artists, music, color, graffiti, souvenir shops, restaurants (there’s even a vegan one) and cafes.

That leaves money in the neighborhood and gives opportunities to see a more real future.

In fact, there are social programs in the neighborhood that provide free training in tourism.

Dozens of kids from the neighborhood are guides to show you around.

The negative, although there is a real effort, especially in graffiti not to forget the past, is that certain terrible events are forgotten and can be repeated.

Well, the Graffiti Tour is the perfect excuse to get closer to Commune 13.

You can hire a Free Tour through like FreeTour.com, just the day before.

Our guide was a young man from the commune, his grandparents were among the first to start living there.

The tour is very interesting, since they will tell you first-hand the history and stories that make this place different.

That it has gone from being a place without future or opportunities to having a real hope.

Each graffiti represent moments or people that transcended in the history of the commune.

Without a doubt, the Graffiti Tour and the visit to Commune 13 are well worth it.

Another perspective of the city of Medellin.

To get to Comuna 13, the best way is to use the city’s public transportation, specifically the subway.

The people of Medellín are extremely proud of their public transportation system.

Perhaps this is the reason why the metro is spotless and very well maintained, no vandalism.

Well, the metro stop where you have to get off is San Javier. This stop is at the end of line B, in orange.

The Free Tour guide start the tour there.

And there are dozens of guides of the Graffiti Tour Comuna 13 waiting for tourists, or offering the services.

Is it better to do a Free tour or a Private Tour ?

A private tour is probably better so you can stop wherever you want and also had more interaction with the locals.

The metro stop where you have to get off is San Javier. This stop is at the end of line B, in orange. The Free Tour guides start the tour there.

Although it was once one of the most dangerous areas in the world, it is no longer so. This does not mean that it is a completely safe area, as there are still occasional confrontations between gangs (although not in the area visited on the tour), and it is possible that sporadically some days the tour does not leave if they consider it is not safe. That’s why we recommend to do it on tour