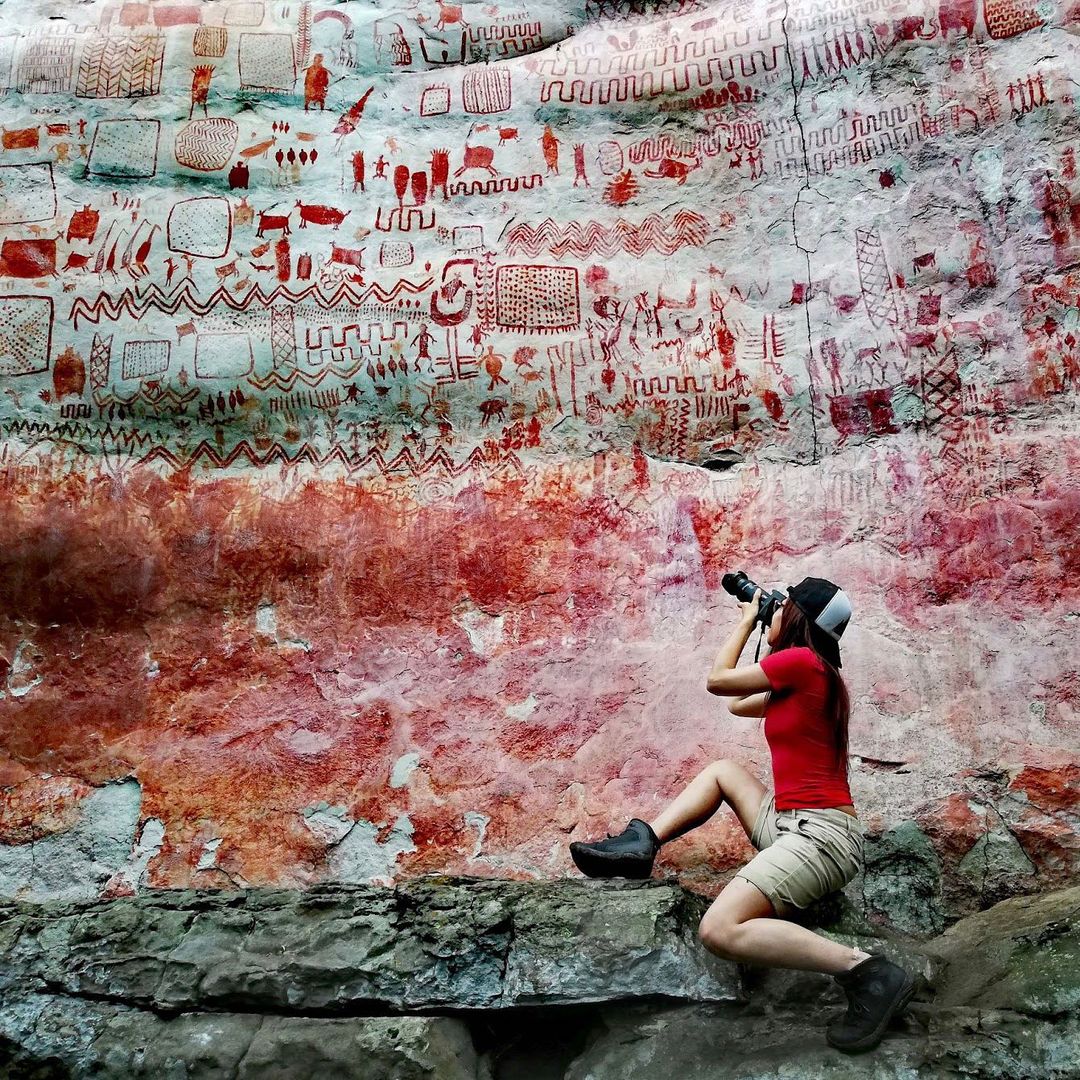 San Jose del Guaviare in a very important tourist spot in the region, where you can visit pictograms in Cerro Azul, rock formations, tunnels and natural bridges, Orion Gate, trails of natural wells, waterfalls where torrenting is practiced, lagoons where you can see the famous bufeo or tonina (inia geofrensis or freshwater dolphin) and many more…

Things to do in Guaviare

Among other things, from San José del Guaviare it is possible to walk among the rock formations of Ciudad de Piedra, in the Serranía de La Lindosa; and to see pre-Columbian pictograms in Cerro Azul. Visiting the Serranía de La Lindosa, near San José del Guaviare, is on the plans of those who come to the city. There the rocky landscape surprises in the plains.

A sample of the pre-Columbian past of this region of southeastern Colombia can be seen in Cerro Azul, 47 km from San José del Guaviare. There it is possible to appreciate a set of red pictograms that were elaborated on the rocks by indigenous tribes. It is estimated that these paintings are more than 1,000 years old.

A sort of outdoor sculpture is the Orion Gate, a stone structure that is fifteen meters high and twelve meters wide. Located nine kilometers from San José del Guaviare, the Orion Gate has two holes several meters in diameter. In the region it is said that through the upper hole it is possible to see Orion’s belt in December.

Just 15 minutes from San José del Guaviare, on the road that leads to Villavicencio, is this magical place of incomparable natural beauty.

Settled there , the visitor will appreciate a spectacle of colors , green , pink , lilac and red , covering the surface of the spa. The phenomenon is produced by the growth of freshwater algae. Waterfalls, wells, bushes, mosses and lichens, among other wonders, make up an unforgettable experience in the territory of Guaviare.

Undoubtedly an ideal place for relaxation, tranquility and meeting with oneself.

Eight kilometers from San José del Guaviare, travelers can dive into the natural wells, pools that have been carved into the rocks by water. The minerals and the vegetation of the area make the tones of the water go from yellow to black, passing through red, so that when submerged the skin looks different colors.

Ciudad de Piedra is one of the most striking sites in the Serranía de La Lindosa, located 17 kilometers south of San José del Guaviare. There, it is entertaining to walk among the ‘avenues’ formed by the giant stones (many of which maintain an improbable balance on top of each other) and imagine in them figures of animals, people and objects.

According to scientists, this system was formed in the Precambrian era, in an area located eleven kilometers from San José del Guaviare.
And on some rocks, there are cave paintings made with mineral pigments. Some represent anthropomorphic figures; others, complex geometric images that have not been fully interpreted, although archaeologists know that their imprecise date of creation exceeds a thousand years old.

The tunnels are rock corridors with twisted walls covered with moss in some parts, bare in others. Above, from that sky that at times cannot be seen, because of the darkness that inhabits such labyrinths, some weeds hang lazily like curtains of mystery.

And when you advance with your clumsy human noise, for not being a nyctalope you need to turn on lights so as not to fall and to be sure, alas, that you will not run into or step on a snake, a flock of bats flies terrified, waking up frightened by the threat of unwelcome visitors, and launch that noise of wings and that screech of theirs configured with an elongated sound of i that echoes through the cavern. They go away leaving you with a dry wind on your face and a shiver that makes you feel a little bit similar, by the texture of your skin, to those rough walls.

Pink Dolphins in the Raudal

Taking a boat ride on the Raudal River is also one of the most beautiful activities you can do in San Jose de Guaviare. And if you are lucky, you can even observe the pink dolphins that inhabit the area.

Swimming, fishing, sailing, snorkeling, and dolphin watching are activities that can be done at Laguna Negra, 11 km from San José del Guaviare. In this site the color of the water is due to the decomposed leaves of the surrounding forests. The lagoon has a surface area of 900,000 m2 and is home to fish species such as the payaras.

The Las Delicias waterfall, a 27 m high waterfall, is a place of choice for adventure sports enthusiasts near San José del Guaviare. At the waterfall, located 17 km from the municipality on the road to Villavicencio, it is possible to rappel. The surrounding area is home to tapirs, monkeys and ocelots, among other animals.

The Arco írises Waterfall is one of the most beautiful waterfalls and is part of the El Paraíso farm where there are more than 4 waterfalls to visit. To get to El Paraíso you must take an alternate road before arriving to San José for approximately 20 minutes. You have to walk a lot in the middle of the forest and the stones so bring repellent and plenty of water

The hotel infrastructure in San Jose de Guaviare includes establishments in the center of the capital and surrounding areas. Rooms with private bathrooms and ventilation, restaurants and recreation areas are among the alternatives offered by the hotels to guarantee the comfort and safety of travelers.

San José del Guaviare is the gateway to the Amazon that opens the way to the legend of the Yurupary. Cave paintings from all eras, pink dolphins and much more fauna. Rock formations, natural pools and tunnels that will make you feel in a lost city.

Book your tour to Guaviare Now

San José del Guaviare has a tropical climate. Most months of the year are marked by significant rainfall. The short dry season has little impact. This location is classified as Am by Köppen and Geiger. The temperature here is on average 28.1 ° C. The approximate average precipitation is 2487 mm.

San José del Guaviare is a Colombian municipality, capital of the department of Guaviare. It began to form in 1960, linked to the colonizing activities of the jungle region and as a nucleus of support for them. In 1976 it received the status of municipality and its demographic growth, since then, has been projected rapidly.

The capital’s cuisine has a recipe book based on traditional preparations that have been rescued by generations of local peasants and indigenous people. Sancocho, broths, meats and amasijos, among other dishes, are part of the offer. The gastronomic infrastructure includes typical and international restaurants, located in the avenues of the capital of Guaviare.

In San José del Guaviare the nights are also of rumba and fun. Bars, taverns and discos, located mainly in the pink zone, are the places that light up the dark hours of the capital.

How to get to San Jose del Guaviare

Route to get to San Jose de Guaviare starting from Bogota we have a route of approximately 7 hours in a journey of about 400 Kms, you must take the road to the plain, passing through Villavicencio, Acacias, San Martin, Granada, among other towns, it is quite easy to get there because the road is in perfect condition and very well signposted.

Is there internet in the Guaviare ?

It has fixed telephone services and nationwide cellular operator coverage. The capital also has a technological network that enables Internet connection in several parts of the city.