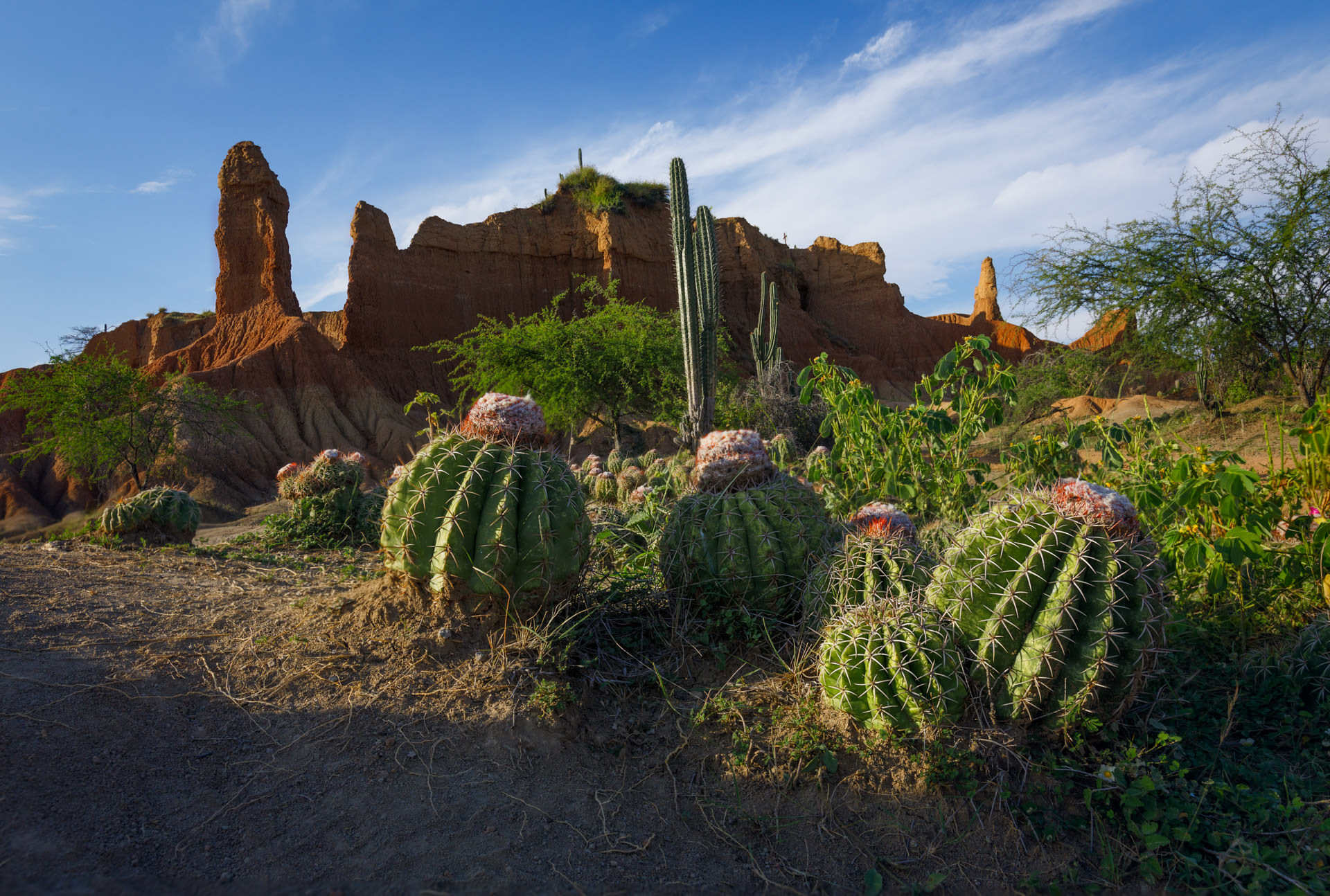 After a forty-minute drive from Neiva to the north, you will reach the municipality of Villavieja, where the La Tatacoa desert is located.

Because of its semi-arid ecosystem, characterized by stunning landscapes; its paleontological, archeological and historical value, represented by a rich variety of fossils in a good state of preservation; and its location, optimal for the observation of celestial phenomena, the Regional Natural Park Desierto de La Tatacoa, located in the department of Huila, is the dream place for those seeking a place of silence and nature.

Things to do in Tatacoa Desert

Arriving from Villavieja, 4 km away, this is the first area that can be seen. It is also known by the name of El Cardón and is characterized by its copper color and the abundant growth of cactus in the shape of candelabra. It owes its appearance to the oxidation of the soil and consequently to the high components of iron dioxide.

In this area is the site called Los Laberintos, whose geomorphology of gullies gave it its name.

Erosion has sculpted small mounds through which trails branch off and are passed by expedition members accompanied by guides. Thanks to the storaques formed in El Cuzco and in most of the desert, geologists have been able to determine the original level of the soil, another form of evidence of the devastating erosive phenomenon.

Visitors who wish to spend the night in the desert find refuge in the tourist inns that the locals have set up to provide lodging and food. Most of them are in this sector.

In the same area of El Cuzco and very close to Los Laberintos, the astronomical observatory is a very important reference of the Tatacoa desert, for the permanent studies and astronomical observations that are made in its dome-shaped structure and thanks to the powerful equipment used for this purpose.

Due to its proximity to the Equator, the absence of light pollution and its location in the highest part of the vault of the sky, the Tatacoa Desert is the best place in Colombia to appreciate and learn about the constellations and all the celestial bodies.

The Villavieja astronomical observatory hosts every July the Star Party, the only event in Colombia that brings together national and foreign astronomers outside the academic classrooms, to make observations under the warm dry weather, transparent nights and an open sky without obstacles on the horizon._

It is the grayish colored area of the desert, because the soil has high components of potassium, sulfur and magnesium. It is 8 km to the east of the observatory and is reached by an unpaved but passable road. During the tour you can appreciate an eroded landscape with the presence of some herds of goats and sheep that feed on the scarce but nutritious vegetation that the desert produces.

In Los Hoyos the deterioration of the land has created abrupt geomorphology scenarios, hence the name, where the shapes make the imagination fly, as the so-called valley of the ghosts.

This sector is located in the village of Palmira de Villavieja where there is also the possibility of lodging in the tourist inns.

There the phreatic waters were used for the construction of the swimming pool El Oasis, nothing more appropriate as a palliative to the intense heat of the Tatacoa.
Information. Orfanda Soto. 311 5365027.

Inside the Santa Barbara Cathedral, located in the municipality of Villavieja, operates this museum that exhibits some of the fossils of the South American fauna found in the region.

How to get to the Tatacoa Desert

Leaving the city of Neiva to the north, take the road that leads to the municipality of Villavieja and from there start the journey through the Regional Natural Park Desierto de La Tatacoa. (Distance 40 kms. Approximate travel time 1 h).

Get to Tatacoa Desert renting a car

If you want to take a road trip from Santa Marta, and have the freedom to visit Taganga, Minca, Palomino and Tayrona at your own pace, a good idea is to rent a car. Here you can compare the available offers and rent a car at the best price.

Find and book a rental car today at RentalCars.com

Get to Tatacoa Renting a Motorcycle

If you would like to visit the area in an adventurous style and go off path, another good idea is to rent a motorcycle. We partner with Adrian who runs Colombian Riders, a top rated motorbike Rental agency

Getting to Tatacoa Desert from Bogota

From Bogota, buses everyday will bring you to Neiva from terminal Salitre or Terminal del Sur from 50.000 Cop. The easiest way is to book from Redbus.co

Getting to Tatacoa from San Agustin

There are buses everyday from San Agustin. You can also check easily the hours and book your tickets online with Redbus.co. Prices start from 40.000 Cop

Can we get to Get to Tatacoa from Salento, Medellin, Cartagena ?

By road there are no direct connexion. The easiest way would be to take a plane to Neiva and then a bus to Villavieja and Tatacoa

Where to stay in the Tatacoa Desert

Travelers can stay in the tourist inns that operate in the Desierto de La Tatacoa Regional Natural Park, located in the El Cusco and Los Hoyos sectors, which also offer food services. In the municipalities of Villavieja and Rivera there are hotels and camping areas.

What to eat in the Tatacoa Desert

In the area of La Tatacoa the traveler can enjoy traditional dishes such as stewed kid meat, pepitoria, sancocho with kid bone, roast lamb and stuffed sheep. These recipes are served in the tourist inns and in the restaurant that operates in the Astronomical Observatory.

Topography of the Tatacoa Desert

The Tatacoa Desert is bordered to the north by the municipality of Natagaima in Tolima, to the south by the town of Baraya, to the east by the Cabrera River and to the west by Aipe and the Magdalena River. The desert is also crossed by several streams such as the Las Lajas stream.

It is a paradox that being surrounded by water, the amazing scenery is the second desert area of Colombia with an area of 380 km2, although it is estimated that its influence has an expansion of close to 1,000 km2. Passing Villavieja towards the east, only 4 km later the first cactus and the reddish color that characterizes a part of this tropical dry forest begin to be seen. Despite the vastness of the territory, only a tenth of the desert is usually crossed by travelers.

The place that the conqueror Gonzalo Jiménez de Quesada described as the valley of sorrows, or tristuras, according to the meaning of the sixteenth century, is a tourist destination in which scientific research is constantly being carried out, because its origin, formation and growth, continues to be an enigma for geologists and anthropologists, among other scholars.

Little by little, other services have been added to the sectors and activities of La Tatacoa so that visitors have the opportunity to learn more about the desert area and to plan activities in its fantastic environment. It is also curious that due to erosion the land has lost its original level, but at the same time, the sky seems to be closer thanks to the fact that the desert is the best point in Colombia for astronomical observations.

History of the Tatacoa Desert

In the historical and cultural sphere, the park’s value is centered on the terraces for housing and the rock pictograms, which are evidence of the existence of pre-Hispanic settlements in the area. These are the traces left by the ancient inhabitants of the territory, including the Totoyoes, Doches and Pijaos Indians. But they were not the only ones to set foot in the region of La Tatacoa in ancient times.

During the time of the Conquest, Gonzalo Jiménez de Quesada passed through the desert in his search for El Dorado. Seeing it without crops, devoid of the riches he hoped to find and with an inclement climate that caused the death of many of his men, the Spaniard baptized it with the name of Valle de las Tristuras (Valley of Sorrows), a title that later became Valle de las Tristezas (Valley of Sorrows).

In addition to its fossil wealth, the park’s more than 56,000 hectares are home to unique flora and fauna. However, it is worth noting that most of the species present in the area are not endemic. Of course, being a semi-arid territory, cacti such as the Cabecenegro el Caminador predominate here, dotting the golden Immensity with their varied shades of green, while serving as a refuge for animals such as snakes, spiders and scorpions.

In El Cuzco and Los Hoyos there is lodging in typical houses of the Posadas Turísticas de Colombia program. Camping areas are also available at the astronomical observatory facilities.

How to get to Tatacoa Desert

If you are not traveling in a private vehicle, buses leave from the Neiva transportation terminal. The approximate travel time is 45 minutes. Information (8) 8731001.
From Villavieja to the desert there are motorbuses with capacity for up to six people that go to the observatory and the Los Hoyos area. Ask for this service at the main park.

What is the temperature in Tatacoa Desert ?

The temperature in the desert ranges between 28 ºC and 30 ºC.