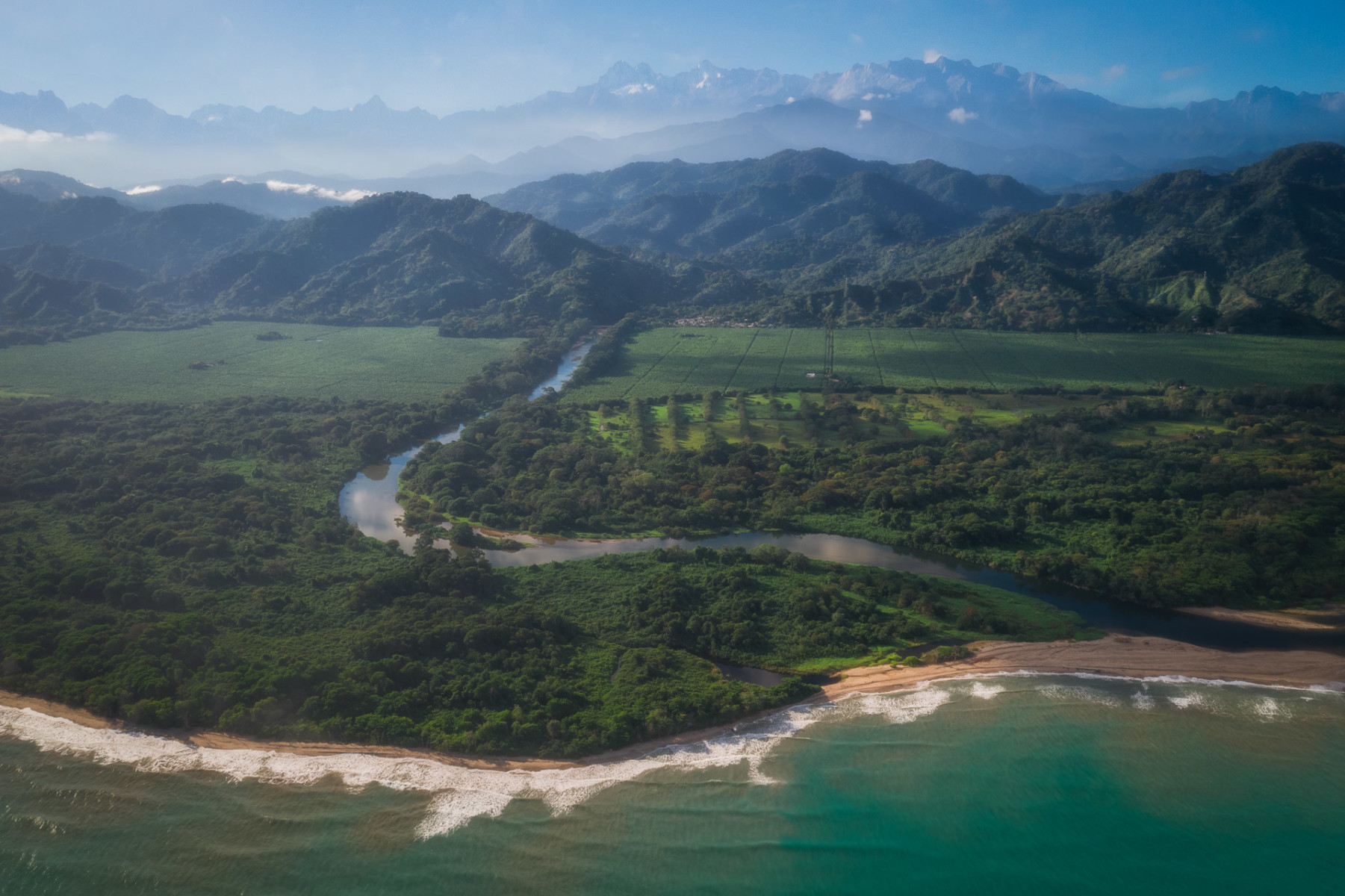 Santa Marta is located in paradise”, in the earthly paradise of the Colombian Caribbean coast. In the middle, a mountain of almost 19,000 feet high looms. At the top, perpetual snow; and at its base, submerged in the Caribbean Sea, perches coquettishly, small and dreamy the oldest city in South America, Santa Marta.

Its riches are innumerable, it has an unparalleled architectural heritage that evokes the times of the banana boom and a complex network of ecosystems in the Sierra Nevada that is unique on the planet. It is the one of the most visited tourist destination in the country. Its colonial buildings, hotel infrastructure, picturesque surroundings and white sand beaches make it cozy and magical.

The Sierra Nevada de Santa Marta National Park was declared a Biosphere Reserve and World Heritage Site by UNESCO in 1979.

The system that makes up the Sierra Nevada de Santa Marta National Natural Park is seen as a colossus that, in addition to being the highest coastal mountain in the world, covers part of the departments of La Guajira, Magdalena and Cesar. Its image offers the vision of a triangular-shaped mountain peak that reaches 5,777 meters in height, while at its base, just 30 kilometers away, are the coral beaches of the Colombian Caribbean.

In the Sierra Nevada de Santa Marta it is possible to appreciate all the ecosystems typical of the tropics. There are the equatorial rainforest, the sub-Andean and Andean jungle, but also the paramo, the super-paramo and even snow. The result of this combination is a natural wealth that makes it a unique place in the world.

Traveling through the Sierra Nevada de Santa Marta is a unique opportunity to discover the rich biodiversity of the area. There are at least eight clear rivers, such as the Buritaca, Cuices and Don Diego, which rise in the snowy peaks and descend the mountain to flow into the sea. On their way they find a landscape made up of 126 species of plants, including giant trees such as the mastre, caracolí and tagua, the latter popular for its use in handicrafts.

Activities in the Sierra Nevada de Santa Marta
As part of the park’s Management Plan, there are marked trails that lead visitors to some of the park’s most important sites. It is important to remember that access to some areas inhabited by indigenous groups and sacred sites is not allowed. Therefore, this decision should be respected by travelers.

Trail to the Lagoon

It is a three-hour hike of medium difficulty that leads to Nukwlindwe, one of the sacred lagoons of the highlands. During the trip you can observe various species of the sub-Andean forest and from the viewpoints you have a panoramic view of the city of Santa Marta and the mountains: Santa Marta and the snow-capped peaks of Colón and Bolívar.

Trail to the San Lorenzo ravine

The traveler can make this journey in an hour and a half, crossing areas with sub-Andean forest vegetation until finally arriving at a fifteen meter high waterfall.

Trail to the waterfall at the source of the Gaira River:

This trail leads to the 30-meter high waterfall that gives rise to the Gaira River. The hike requires approximately five hours and the level of difficulty is high.

Climbing the Colón and Bolívar peaks

With prior authorization from the indigenous people who inhabit this territory and the National Natural Parks Office, visitors have the opportunity to climb to the perpetual snow of the two highest peaks of the Sierra Nevada de Santa Marta. This is an activity recommended only for expert climbers and mountaineers.

How to get around in Sierra Nevada de Santa Marta

Getting around Renting a car

If you want to take a road trip from Santa Marta, and have the freedom to visit Taganga, Minca, Palomino and Tayrona at your own pace, a good idea is to rent a car. Here you can compare the available offers and rent a car at the best price.

Be aware though that road are in a bad state in Sierra Nevada De Santa Marta, and you may need to park the car in the village and then take a 4×4 or a motorbike taxi.

Find and book a rental car today at RentalCars.com

Getting around Renting a Motorcycle

If you would like to visit the area in an adventurous style and go off path, another good idea is to rent a motorcycle. We partner with Adrian who runs Colombian Riders, a motorbike Rental agency

Getting around renting a 4×4 with Driver

If you prefer safety, traveling with an experienced 4×4 driver is essential in the Sierra Nevada de Santa Marta. The roads are often in an incredibly bad state, and in rainy season things get worth. With a private driver, you can drive to Cerro Kennedy or visit remote communities. Here you can contact our partners, we have partnerships with several excellent drivers in the area

Find and book a 4×4 today with our partners

How to get to Sierra Nevada de Santa Marta ?

Leaving from the city of Santa Marta, take the road that leads to the department of La Guajira to the San Lorenzo experimental station (distance 42 kms. Travel time approximately 3 h). To reach the station it is necessary to use a four-wheel drive vehicle. Those who wish to climb to other areas of the park, such as Filo Cartagena and Alto de Mira, must take a mule or walk for approximately six hours.

To access the Bolívar and Colón peaks you have to start the trip by road from the city of Valledupar to Pueblo Bello and the Arhuaco village of San Sebastián de Rabago (distance 54 kms. Approximate travel time: 1 h). From there you begin a hike along a trail that leads to the glaciers.

In the San Lorenzo and Filo Cartagena areas, there are lodging services in cabins. In Alto de Mira, travelers can sleep in hammocks located inside the indigenous malocas.

There are no restaurant services in the area of the trails frequented by travelers. Therefore, visitors should bring food that includes beverages (preferably water) and energy products that will allowthem to endure the long hikes.

It is suggested to buy handcrafted objects produced by the indigenous communities that inhabit the highlands, such as the tutu or Tayrona backpacks, woven with wool, fique and cotton and symbolizing the creation of life.